After recently increasing my monitor setup to 3 flat screens! I decided to embark on the ultimate 2-window Visual Studio layout, docking most of my non-text editor windows on monitor 2. After lots of precision placements of windows, I thought I had better close Visual Studio so that it saves my new layout. Well fat chance!

Visual Studio threw up the depressing “Microsoft Visual Studio has encountered a Problem and needs to close.” 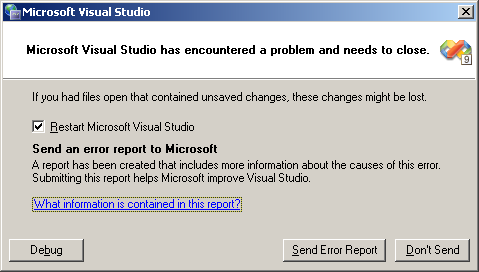 For a laugh I decided to fire off the error report via the “Send Error Report” button. The subsequent confirmation button had a link on it which I almost missed.

Clicking on this link took you to a rather generic looking Windows Error Reporting page: 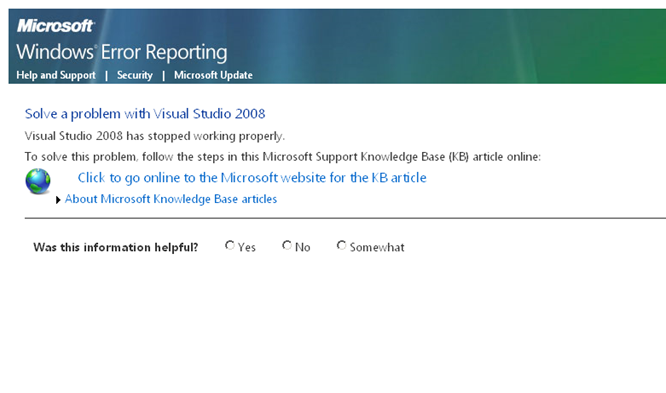 However out of curiosity I followed the link to the KB article, expecting it to be next to useless in solving my issue. However imagine my surprise when the article was 100% relative!

UPDATE: I ended up reading the comments on http://code.msdn.microsoft.com/KB960075 before installing the hotfix and “Window->Reset Window Layout” fixed the crashes for me. In the end I didn’t bother to install the hot fix.

2nd UPDATE: Okay so I *DID* have to install it in the end, and it worked fine.